Up Close and Personal with Honeybees!

Minnesota Grown's Jessica Miles visited a hive of one of Minnesota Grown's honey producers, Sorensen Honey Farm. The morning started with Jessica and her sister, Becky, getting into the bee suits while Dan, Kara and Kirby explained general habits of bees. They were full of knowledge about bees and extremely nice to the slightly terrified sisters. After chatting for awhile standing behind the trucks, we ventured over to the hives and they opened one up. It was amazing to see all the bees inside working hard! Nerves quickly vanished as Jessica and Becky learned of all the hard work bees do and their extremely structured society of the bee hive.

Launie Sorensen started bee keeping when he was only 8 years old with only two hives and worked his way up to 550! Launie had taken some time off from bee keeping, but he and his kids re-started Sorensen Honey Farms four years ago. They currently have about 200 hives in and around the Owatonna area. This family can truly attest that beekeeping isn't just a profession or a hobby, it truly becomes a passion.

Each hive consists of one queen bee, which is the only bee with fully developed ovaries and capable of laying eggs. She mates only once with several male (or drone) bees and will remain fertile her whole life. She generally lives 3-5 years and lays up to 2,000 eggs per day. Once she is unproductive or dies, the other bees will make a new queen bee, by selecting a young larva and feeding it royal jelly. This milky substance is made of digested pollen and honey/nectar mixed with a chemical secreted from a gland in a nursing bee's head. It can be harvested and used as a dietary supplement and fertility stimulant for humans and is sold at high prices rivaling caviar!Worker bees (all of which are female) make up most of a hive, about 60,000-80,000 during the summer months. They only live for about 6 weeks, literally working themselves to death. The worker bees take on a series of specific chores during their lifetime: housekeepers, nursemaid, construction worker, grocer, undertaker, guard and then after 21 days they become a forager and start collect pollen and nectar for the hive. Worker bees will travel up to 6 miles and visit 50-100 flowers during a collection trip. Their wing stroke is extremely fast, about 200 beats per second, making their distinctive buzz sound. Honeybees are not aggressive by nature and only sting when provoked by an intruder. Worker bees have a barbed stinger that results in their death after they sting.Drone bees (all of which are male) make up the final bee in a colony. There are very few drone bees, only about 300-3,000 per hive. They are kept on standby during the summer months in case a queen bee needs to be mated. Drone bees have a barbed sex organ, which results in death after mating and they have no stinger. Drone bees are expelled from the hive (kicked out and left to die) in the winter months, since they are not needed.
Although inactive during the winter months, the hives are not destroyed and the bees stay in Minnesota. Bee hives shrink in size to about 20,000-30,000 worker bees. The worker bees also live for 4-9 months, since their workload is lighter. The bees huddle together for warmth and self-regulate the hive temperature, keeping it near 93 degrees Fahrenheit
Each worker bee will produce about 1/12 teaspoon of honey in its lifetime. A hive of bees will fly 90,000 miles, the equivalent of three orbits around the Earth to collect 2.2lbs of honey. Honeybees are not native to USA, buy rather are European in origin and brought to America with the early settlers. 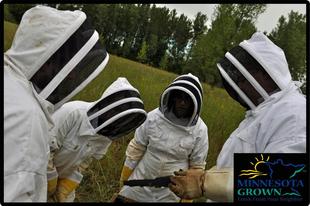